CLAY: The people on The View, they do a live show. I think it’s on ABC or maybe it’s syndicated. I don’t really know. I haven’t watched it that much, ever. But they were preparing to interview Kamala Harris, and before they interviewed the vice president, they were going after everyone who was unvaccinated with the continued lamentations of the uneducated.

As if, “Oh, if everybody gets vaccinated, covid just goes away. It’s all the unvaccinated people’s fault even though the data doesn’t reflect that,” and, by the way, Buck, I don’t know if you agree with this: I think Joy Behar may be the dumbest person who’s on television, on a daily basis, in terms of what she says.

CLAY: I genuinely question her intelligence.

BUCK: Strong contender. Some other names come to mind, but I gotta tell you: Her brand is to (impression) “say the dumbest things imaginable on television.”

CLAY: Every time I see her say anything, it is the most colossally wrong and unintelligent take that you could possibly have on virtually every subject. What was she? Was she a comedian? How did she end up with that job? 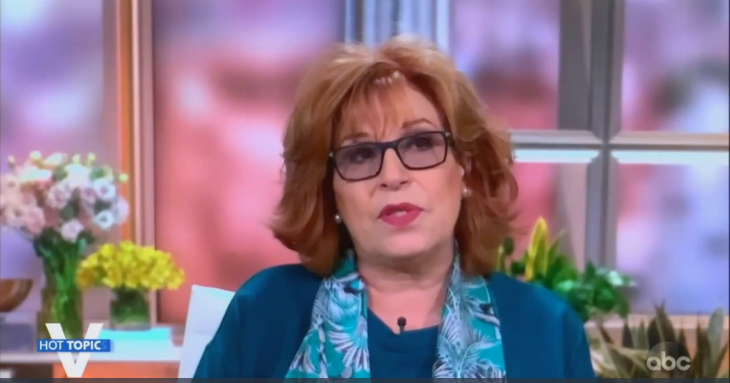 BUCK: Yes, she was a comedian for a long time, and she’s still a comedian without intending to be whenever she speaks about American politics or really anything, for that matter.

CLAY: So we’re gonna play a couple of clips for you. This just happened in the last couple of hours, last hour or so. The View was getting ready for their Kamala Harris event, their interview, and they have a producer walk out and let them know that two of the hosts have tested positive or have to be removed from the set; then, I think, we get an explanation. Let me go ahead and start with the first conversation here.

BEHAR: There seems to be something happening here that I’m not 100% aware of. Can someone please apprise me of the situation?

PRODUCER: I need, uhh, the two of you to step off for a second.

BEHAR: And we’ll tell you why.

BEHAR: We’ll tell you why in a couple of minutes. So shall I introduce the vice president?

BEHAR: No. Shall we dance? Let’s do a tap dance.

PRODUCER: Let’s go to commercial and we’ll come back.

BEHAR: As we always do in television when we’re in a tight spot, “We’ll be right back.” (cackles)

BUCK: Yeah. We do live radio. They do live TV so when you’re live, you’re live, and stuff happens. So, they had two of the hosts before… Clay, also, what is going on here? I guess they wanted… Look, we’re talking about it; so maybe that’s the whole plan, right?

They had tests of the hosts for covid before Kamala Harris appeared. Now, I would bet that all of these hosts are vaccinated, right? So start with that. So they’re vaccinated but still being tested because it’s only one in 5,000, as Biden says, that you’ll have a breakthrough infection.

CLAY: It seems like there’s an awful lot of breakthrough infections for one in 5,000.

BUCK: Seems real weird I have friends. You know people here in New York City who are vaccinated and gotten sick.

BUCK: So it feels a little weird, but, yeah, turns out that Ana Navarro and you have a Sunny Hostin, two of the hosts on The View, tested positive for covid, and I say, “These are two ladies who are on a show that on a regular basis is essentially looking down on — well, Trump voters, period, but also — Trump voters who they say won’t get vaccinated because they deny science and they also make this into a moral question,” right?

Whenever someone who’s vaccinated on the other team gets infected with the virus, there’s this assumption of, “Yeah, well, you got it because you didn’t listen to Fauci!” I mean, a hundred, 150 million people have been infected with this virus. At what point do we drop the “what did you do to get virus?” idiocy that comes from the Fauciites?

CLAY: Let’s listen to. They came back from commercial break, Buck, and announced that both of those two women who they had removed had tested positive for covid. This is what it sounded like.

BEHAR: Okay. So, since this is gonna be a major news story any time now, what happened is that Sunny and Anna both apparently tested positive for covid. No matter how hard we try, these things happen. They probably have a breakthrough case because they’re both vaccinated up the wazoo, you know, a lot of vaccines. So — and the vice president is being prepped for her arrival, right? They cleaned the table, we washed the hands, everybody’s getting all cleaned up, and she’ll be out here in a second.

BUCK: So they’re “vaccinated up the wazoo,” as she says, as if your love of masks and vaccines is an extra layer of protection in and of itself. If you worship at the altar of Fauciism, Clay are you more protected? How do you get vaccinated up the…? Oh, I mean —

CLAY: That would be a tough place to be getting vaccinated, I think. But let’s break this down a little bit more. Because all this is very strange. So if you wanted to daily test… First of all, let’s start here. The breakthrough rate is way more than one in 5,000, because I bet just about every single person listening to us knows someone who has been vaccinated that has also been tested positive for covid.

And certainly there have been a ton of celebrities who have. But if you’re daily testing still for covid even though they’ve been vaccinated, why would you daily test in a way that you get results in the middle of a life television program?

BUCK: Well, because it obviously creates opportunity, I guess, for the on-air drama that we saw.

CLAY: Do you think they’re planning this?

CLAY: I had to do that too.

BUCK: Everybody, everybody had to do it before you went in. So I guess if you’re around the VP. But notice how they’re all vaccinated, and two of them… What are the chances that two people —

CLAY: Half of them.

BUCK: — that half of the hosts (I guess it’s hostesses or hosts, whatever) of The View happen to have covid at this stage when the vice president is coming? They’re just part of the one-in-5,000 chance that we’ve been told about, right? This is where you start to say, “Something’s not right.” Clay, we know the vaccines lose efficacy over time.

I do think what you’re seeing here is a desperation for people to move into the next phase of Fauciism before it becomes too clear that if you got vaccinated in, like, March or April, come this wintertime, you’re basically just maybe have a slightly better window of protection against death than everybody else, but that’s it. You’re gonna get sick.

This story originally appeared in Clay Travis and Buck Sexton

About The Clay Travis and Buck Sexton Show